From Me to We: Readings for 17th Sunday in Ordinary time. 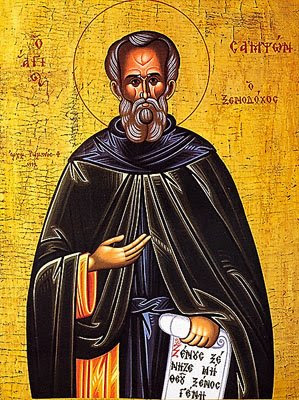 One of the first great Missionaries from Britain onto the continent, he was born in Wales of noble, but not royal, birth. While still an infant he was dedicated to God and entrusted to the care of St. Illtyd, by whom he was brought up in the monastery of Llantwit Major. Years later, after much success in his studies, he was ordained deacon and priest by St. Dubric. Years later, was made Abbot of a Monastery.  Not long after his appointment  some Irish monks who were returning from Rome happened to visit Samson's monastery. So struck was the abbot by their learning and sanctity that he accompanied them to Ireland, and there remained some time. After a few years of absence,  he returned to Wales, where his fame as a worker of miracles attracted so much attention that he resolved to found a new monastery or cell "far from the haunts of men", and accordingly retired with a few companions to a lonely spot on the banks of the Severn. He was soon discovered, however, and forced by his fellow-countrymen to become abbot of the monastery formerly ruled by St. Germanus;  He was ordained by St Dubric as Bishop, but eventually received a warning  from an angel,  which made him  determined to leave England and,set sail for Brittany. He landed near Dol, and there built a monastery which became the center of his episcopal work in the district.  It's where he lived until the age of 85, and where's he is buried.
I'm afraid Today's saint really has not many connections to my reflections on the readings, but I'll only point out that I love it when the stories of Saints mentions other Saints! I promise to attach the Wikipedia link to the Saints mentioned from here on in. It's educational, and will help us get a better picture of this communion of Saint of ours!

Reflections:  World Youth Day in Rio has come to a close. News is still coming in about the actual figures, but an estimated over 3 million people  attended the last Mass - there aren't many events in modern history that have drawn that many people in one single place at the same time!  The Philippine World youth day in 1995 still holds the Catholic record with 5 million in attendance at the last Mass!- Part of the reason for the big numbers is of course Pope Francis. There are still many controversies around his papacy, and yet, his words and deeds embody so much of the Gospel message with them. Pope Francis is eager to restore some humility and simplicity in the Church, and many are excited about this call.

Another one of his emphasis is how our faith  should take us out of ourselves, and into service of others. Our personal relationship with God is of great significance, and any journey of faith needs to begin at a very personal level. We see it with Abraham in the first reading. He has an incredible intimate awareness of God, an ability to speak with God at a very personal level, but also a deep knowledge of Who God is, how God would act. " Far be it from you to do such a thing as destroy a place that has righteous people". And yet, in this reading we see that Abraham is not turned to an interior experience of faith only. He gladly prays to God on behalf of the sinful city of Sodom and  Gomorah. He's concerned for his own relative, Lot,  but he is praying for the well being of the entire city. It's not just a personal, isolated relationship with God anymore. He has gone from his own needs to that of others. And he is pretty courageous in doing so too, as he tries to bargain for the safety of this town with God, almost calling God to task!! Ironically, that strength, that courage to speak his heart so honestly before God, comes not from himself, but from God!! This is a sentiment also  expressed in the 2nd reading as well, as Paul reminds us that though we die in our sins, through the power of our faith in God, through the intercession of our Lord, we take on a new life.


This is the whole point of having a personal faith/relationship with God. It eventually grows/buds into something stronger, more courageous that will be of greater service to all humanity. As the  Psalm states beautifully  (paraphrased!)" I called, and you answered by strengthening my spirit".  With that strengthened spirit, we can move mountains!  Still, some people may say to me ' I tried talking to God, and he doesn't respond/ listen".  I promise you...God listens. The only problem is, many people out there assume God doesn't care simply because he doesn't give 'ME the things I want when I want them'. Yes...that's right. God don't work that way! That's a good thing. Otherwise Our Lord and Savior would be nothing more than a butler for us!! Instead, God is trying to teach us to exercise patience, faith, and care of others. To move from what 'I want' to what ' the people around me need". This is an act of courage and strength that we need to exercise...correction...it's an act of courage and strength that we need to let God exercise in us.

This is why we pray as Jesus taught us. Those of you who pray the 'Our Father' regularly will know this: We do not pray 'My Will' be done...but 'YOUR/THY will be done'  And God's will does not lie in the selfish gratification of our own desires, but in the betterment of  all humanity. That's what Jesus means when he says ' ask and you shall receive'. He's really not saying 'ask anything you want', but instead, 'ask for the good in our world' We have a ways to go before our Christian community lives this unselfish prayer with the fullness of  Her heart, but let us never stop praying as Jesus has taught us...that's a wonderful start: