Reform through hope and love: Readings for Thursday October 3rd 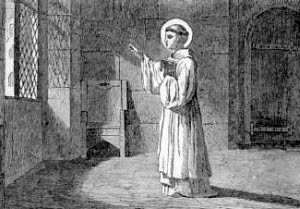 
Reflections:  Today's readings, point to great historical moments in our Faith history. Moments driven by the vision of great men with a deep  deep love for God. I feel that these days, we seem to be heading towards  another one of those great moments of historical transition thanks to our Pope. He and   St Gerard seem to share some traits in common. Both seem(ed) committed to their vision, and are (were) wiling to labor for it until the end. You can feel History being made by both figures, as they quietly -or in Francis's case sometimes, rather loudly- pave the way for small, but important reform.

This same historical  mood  of importance is captured in Nehemiah, as Ezra and Nehemiah work to restore, not only the dwelling place of the Israelites who have just returned from exile, but their entire faith.  There are a lot of poignant moments as the people gather as one to hear the Words of the Lord. They are absorbed by the teachings, moved to tear by their own failings to live out these precepts, and finally told that they should not be grieved for 'the Joy of the Lord is their strength'.  This is a powerful message for us today as well. We some times get caught up in the bleakness of our world, with intolerance  and hatred always spreading in the world, from Quebec to the Middle East and beyond, with our environment deteriorating every year, and  more social problems than we could ever know what to deal with. Yet, in the midst of this, is the spirit of God who rejoices at the small victories in our lives. God's  joy, IS our strength.

Finally, we have Jesus, sending his disciples and others on their own for the first time. It's a powerful moment. Unfortuantely, it takes a negative turn near the end, as those who don't receive the Gospel, the good news, are basically cursed.  Fortunately, It seems these days, Pope Francis is focusing more on God's deep joy and affection for us, more than he is the condemnation we see in the Gospel reading.  He'd probably tell us 'don't focus on the condemnation...focus on the 72, going out into the world with God's fire in their heart. That moment is a moment of great faith for all of us to learn from.'  It's not always easy to face the journey ahead, especially one that embraces humility and poverty, but we must trust that God's Joy, and consequently, God's strength will overcome all our fears.

Nehemiah 8: 1 - 12
1And all the people gathered as one into the square before the Water Gate; and they told Ezra the scribe to bring the book of the law of Moses which the LORD had given to Israel.2And Ezra the priest brought the law before the assembly, both men and women and all who could hear with understanding, on the first day of the seventh month.3And he read from it facing the square before the Water Gate from early morning until midday, in the presence of the men and the women and those who could understand; and the ears of all the people were attentive to the book of the law.4And Ezra the scribe stood on a wooden pulpit which they had made for the purpose; and beside him stood Mattithi'ah, Shema, Anai'ah, Uri'ah, Hilki'ah, and Ma-asei'ah on his right hand; and Pedai'ah, Mish'a-el, Malchi'jah, Hashum, Hash-bad'danah, Zechari'ah, and Meshul'lam on his left hand.5And Ezra opened the book in the sight of all the people, for he was above all the people; and when he opened it all the people stood.6And Ezra blessed the LORD, the great God; and all the people answered, "Amen, Amen," lifting up their hands; and they bowed their heads and worshiped the LORD with their faces to the ground.7Also Jesh'ua, Bani, Sherebi'ah, Jamin, Akkub, Shab'bethai, Hodi'ah, Ma-asei'ah, Keli'ta, Azari'ah, Jo'zabad, Hanan, Pelai'ah, the Levites, helped the people to understand the law, while the people remained in their places.8And they read from the book, from the law of God, clearly; and they gave the sense, so that the people understood the reading.9And Nehemi'ah, who was the governor, and Ezra the priest and scribe, and the Levites who taught the people said to all the people, "This day is holy to the LORD your God; do not mourn or weep." For all the people wept when they heard the words of the law.10Then he said to them, "Go your way, eat the fat and drink sweet wine and send portions to him for whom nothing is prepared; for this day is holy to our Lord; and do not be grieved, for the joy of the LORD is your strength."11So the Levites stilled all the people, saying, "Be quiet, for this day is holy; do not be grieved."12And all the people went their way to eat and drink and to send portions and to make great rejoicing, because they had understood the words that were declared to them.

Love proved by deeds: Memorial for Theresa of the Cross 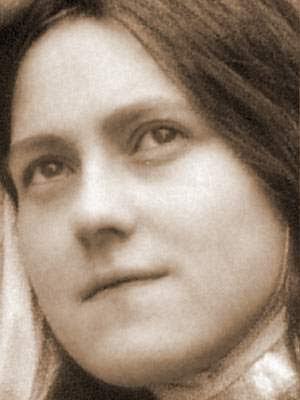 “Miss no single opportunity of making some small sacrifice, here by a smiling look, there by a kindly word; always doing the smallest right and doing it all for love.”
― St. Thérèse de Lisieux

Today, we are celebrating Therese,  one of the Church's most beloved daughters - Next to Mother Mary, probably the most prayed to woman in the Communion of Saints!- .Despite the fact that her own desires to follow the path of priesthood could not be fulfilled in this Church she so loved, she was able to cultivate a life of love and charity in our world, so much so that her 'little ways' continue to be admired by millions -even non Catholics!- today.

Born in France in 1873 she was raised in  a very pious family. She chose contemplative life at the age of 15,  like her two older sisters before her, and entered the Carmel of Lisieux. In addition to religious responsibilities, St. Therese was a writer. She penned an autobiography, poetry, letters, and prayers. Her poems give praise to God for His unfailing love and speak to her desire to model her life after Christ. Also, St. Therese lived this devotion in “little ways,” becoming known as the “Little Flower of Jesus.” She died at the young age of 24, but her writings continue to inspire the faithful. St. Therese was canonized in 1925 by Pius XI and declared a Doctor of the Church in 1997.


Reflections:  I don't usually use this blog to speak about current events, but it's hard for me to avoid talking about the great spirit of reform coming out of Rome these days. Thankfully, the changes that Pope Francis seems to be inspiring have nothing to do with what the secular society and Media want to see in the Church, and everything to do  with this Church going back to her roots in following Jesus with profound simplicity, love, and care for others,  while staying open to exploring how the She can have an even more  positive impact  in this world. (in truth, the Roman Catholic Church already has that  positive impact on our world. However, I guarantee you Francis would argue it's not enough, and we can do more!)

And as we set out on this journey of reform,  millions of people (both Catholic and non Catholic alike apparently!) will have opinions of what the Church should be doing to making the world a better place, and will probably voice that opinion on a weekly basis.. But as valuable as those opinions may be,  it's not to these, but to people like St Theresa that we will have to be turning to.  She has paved the way for us, showing us that it's not the big ambitious plans, but the daily little deeds of love that bring us closer to God.  The big gestures will be appreciated and important, but they'll be meaningless if they don't come from a place of love.  If God is truly to be with us in this time of reform, it isn't the thunder and lightning that will change hearts and minds of others (thus the rebuke that Jesus offers his disciples in today's readings) but a testimony of humility, meekness, and affection for our world and those in it. It's what Theresa did for the short 24 years she was on earth, and it's what Pope Francis is inviting us to do almost every week.  How we as Catholics respond is what will really determine where this Church will go.  Let us hope the people are up to the task of carrying the Church, and the Spirit of Theresa, well beyond the 21st century.

20 “Thus says the Lord of hosts, ‘It will yet be that peoples will come, even the inhabitants of many cities. 21 The inhabitants of one will go to another, saying, “Let us go at once to entreat the favor of the Lord, and to seek the Lord of hosts; I will also go.” 22 So many peoples and mighty nations will come to seek the Lord of hosts in Jerusalem and to entreat the favor of the Lord.’ 23 Thus says theLord of hosts, ‘In those days ten men from all the nations will grasp the garment of a Jew, saying, “Let us go with you, for we have heard that God is with you.”’

1 [Of the sons of Korah Psalm Song] With its foundations on the holy mountains,
2 Yahweh loves his city, he prefers the gates of Zion to any dwelling-place in Jacob.
3 He speaks of glory for you, city of God,Pause (Selah)
4 'I number Rahab and Babylon among those that acknowledge me; look at Tyre, Philistia, Ethiopia, so and so was born there.'
5 But of Zion it will be said, 'Every one was born there,' her guarantee is the Most High.
6 Yahweh in his register of peoples will note against each, 'Born there',Pause
7 princes no less than native-born; all make their home in you.

51 Now it happened that as the time drew near for him to be taken up, he resolutely turned his face towards Jerusalem
52 and sent messengers ahead of him. These set out, and they went into a Samaritan village to make preparations for him,
53 but the people would not receive him because he was making for Jerusalem.
54 Seeing this, the disciples James and John said, 'Lord, do you want us to call down fire from heaven to burn them up?'
55 But he turned and rebuked them,

56 and they went on to another village.
Posted by Dan Leckman at 19:17 No comments: