One of the most common image of priests in the  Catholic Church seems to be more of a residue from a different time, an image represented by our Saint today: An old Priest, railing at his Parishioners because of their sinfulness, threatening them with the fires of hell if they don't 'fly straight'. This image is one of the reasons why there are so few people in the pews in our Churches today. Nobody likes being told how bad they are, or to be threatened with hell just because they like gay people or have contemplated an abortion or any other 'immoral' act.  The thing is, as much as I could not stand having a priest like that in my own parish, I feel that there's something special about today's Saint that almost justifies this behavior.
The way I see it, he's not just shaking his angry finger at sinners...he genuinely wants to see a more holy people in his parish.. He's tired of the corruption, the sinfulness that pervades in his world, and he feels he can do something about it. What sets THIS priest apart from many others, is that he's not afraid to condemn the rich.  In fact, he probably sees them as being the most corrupt of the lot, and he does not give up on his mission to 'reform' them. One thing I did not add in the bio about St John, is that he seemed to have an ability to read souls.  One look at a person, and he could see, or understand something about the depth of their being that even the person standing in front of him couldn't fathom about themselves. Combine that with the tremendous humility and simplicity, his closeness to the poor and his concern for Justice, and we have one of the most exceptional Saints in our calendar -who is not even remembered by the main liturgical calendar anymore!!-.

In today's readings, we have both a strong message, and a minor tension.
The message continues the theme that began with our reflection of the live of St John: Radical humility before the Lord.  Not a popular subject...and again, I feel that this is an idea that may make the Church more unpopular among people. Nobody wants a priest telling them about their sins, and nobody wants to be humble..never mind being radically humble.(FYI, humble does not mean self hating. It simply means, recognize your smallness before the greatness of God.) But the Ideal that St John proposed with his life is echoed not just in our readings today, but in one of the best movies, and definitely the most Catholic movie of  last year, 'Les Miserables'.  The character of the Bishop living in the countryside in deep poverty, giving everything he has to share to Jean Valjean, is an inspiration to many in the clergy today, but it was intended by Victor Hugo as a criticism of the French  Clergy of the 19th century. He felt that Church men were too attached to their riches and luxuries, too corrupt. So he depicted this model of profound humility and service, this man who dedicated his life -as St John did- to living simply, but also to loving deeply anyone who came into his life. It was his way of saying to the Church 'you speak of poverty, but can you live it?' I believe we're lucky in the 21st century to have a Pope who has dedicated his papacy to answering that very same question with a very loud 'Yes!!!', and is eager to help the universal Church experience that simplicity as well.

But even if we did attain that model of humility, whatever 'merit' we think we have by attaining this, is not really ours at all. The Merit is God's, and the Holy Spirit's. As Paul says in today's first reading,  our competence, (our skills, talent, gifts) are not from ourselves, but from God.
Anton the Atheist: " Whoa whoa whoa dude...that's nonsense!! (not the word my 2nd imaginary friend  used, but I'm keeping this blog clean!) If you, or any priests or religious are good at what you do , it's because of your formation. It's all your effort that made you  a good teacher or academic or spiritual guru, it has nothing to do with...

Dear Anton...it has EVERYTHING to do with God. Yes, we put the work into our formation and learn the skills we need to learn, but it's how we apply that knowledge into our lives that makes us distinct from how an physicists apply their  knowledge, or how an engineer or lawyer or doctor does his or hers.The knowledge we develop becomes a starting point for prayer. The work we do is always -or at least it should be !- rooted in prayer, in a dialog with God. This knowledge that we supposedly 'own', we then share with God, and deepen it through reflection and meditations..and what comes out of these conversations is even more knowledge..not through our own efforts, but by the grace of God does all this happen. It is a collaboration in the end. Yes, we still have to work in our relationship with God. But the harder we work, the more we receive from God, the more we realize how we don't own knowledge or skills or talents, but are given them by God to share with others. And that is incredibly humbling. People, in my life, will tell me how wise I am, how helpful I've been, how much I've guided them...and everytime, I will have to secretly offer it up: 'Praise be to you O Lord, that I've been able to help this person through your intercession and grace'.

Paul in all his wisdom reminds us of this,  but he also complicates things with his ideas about the contrast between the Old and the New covenant.  We learned this year in our New Testament  class that Paul -as well as Matthew and Luke-  would struggle a lot with the Jewish community in his work, and this was reflected in his writings. Although a Jew himself originally, his hostility towards his people's response to the Gospel of the Kingdom seems to have been so strong that he would have begun discrediting the Old Covenant as something that has faded- or will fade-. I'm not going to even attempt at interpreting the full passage because I don't have the theological formation for that,but whatever interpretation we give, my concern is how other people in the Catholic world would read it. I'm guessing, it wouldn't be a very positive read. Some may even use passages like these to discredit Judaism. If this is how they read it, thankfully, the Gospel passages comes along to create a nice healthy tension in the reader's mind.

Jesus, we're reminded, did not come along to discredit or to abolish the old Law..but to fulfill it.  To live it out more fully than anyone ever had before, but not to seek praises for it. To simply set out on the task the Father had set for him in perfect humility...a task way bigger than he himself was...a task that would change the world for ever.
But how do we respond to such a tremendous act of love? I think the Psalms give us good cues...Extol God. Always. Be humble in your worship...worship at his footstool.  Call out to Him in your time of need...share with Him in your time of Joy. Let God be part of every aspect of your life....and see what happens. 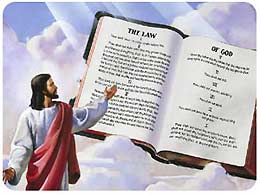