Can Judgement triumph over love? Readings for Sunday April 28th


Entered a Diocesan priest in France, was able to revive a rundown community, but eventually had his mind on missionary work,so, in 1831, he joined the newly formed  Society of Mary (Marists)  which concentrated on missionary work at home and abroad. After a few years of teaching in France, he was sent to the  New Hebrides  (Vanuatu) islands  in the Pacific as Superior of an evangelizing community.

He brought the faith to the natives of the Island, and was fairly well received, but with time his success brought jealousy of the local King, who on  April 28, 1841, had his men was seize and club Peter to death . His death  inspired people on the Island, as the entire Island  converted 5 months after his martyrdom.

I know there are some people who see  missionaries as people who tried to destroy other cultures in order to force Christianity upon a  local people. And we know there were such missionaries who saw evangelization as a kind of 'culture war' where other spiritual practices had to be eradicated in order to advance Christianity -we've seen examples of that in our own history, in the way some  European missionaries treated  the Native  people in Canada-. However, it's good to  remember that for many missionaries, this venture into a new place, a new culture, was a loving opportunity to bring the Good news of the Gospel to all people. Nothing more. And so they learned the culture and the language of the people in order to communicate this message to all who would receive it(which is what many  Jesuits did with the natives in Canada.)  Rather than a rejection of the local culture, it's an effort to bring Christ into that culture.  I myself have struggled with this kind of missionary work in the past, but the deeper I fall in love with God, the more I understand why those who truly loved Christ wanted the whole world to know about His wondrous loving presence among us.
READINGS 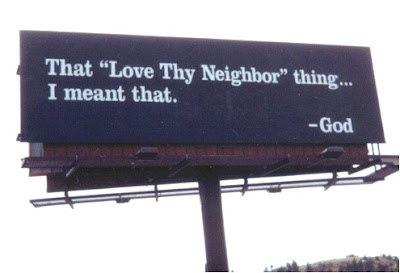 And yet, all too often, the Love Jesus communicated to us is lost, in a kind of  tension between the good religion can achieve in people, and the bad that people do in the name of  that religion.  The tension is a real one, but it's more complicated than we think. All too often the problem is not only that people use religion for evil, but that they are quick to make their own, simplified conclusions of what  sacred scripture is really saying. Even worse, sometimes, people simply concentrate on one theme, and ignore the richness of the whole text that accompanies that theme.

Take today's 2nd reading from the book of Revelation. It's a relatively profound text that speaks of the New creation that is being formed by Christ's love and his sacrifice for us. It's also a text that is painfully easy to misinterpret.  I saw an example of that this morning during  Mass at a local parish, as I noticed the reaction of our choir director to one particular verse:
" And I saw  a holy city...coming down from God, prepared as a bride adorned for her husband".
Taken in isolation, cut off from the rest of the text, this could be seen as an offensive text to women. Some may see this as a passage that suggests that the only role women have is to look pretty, or 'be adorned'  for their husbands. This certainly seemed to be the interpretation the choir director was going with, as he put down his missalette -mass book-  in disgust. He, like some more liberal Catholics out there, do seem to go to the negative interpretation of texts rather naturally, in their desire to blame the Church for not being 'modern' enough.  In developing this point of view, they work from the assumption that  most Catholics are much better at judging  one another, than following Christ's  command to love one another.  They are not alone in making this assumption.  It seems that many people in this world have simplified the experience of faith to that of judgement. And honestly, I don't blame them. There are many people of faith for whom judging those who fail to do good is more important than loving them.

And yet, if this behavior was representative of the entire faith, we would not have stories like that of today's martyred Saint, St Peter Chanel, who was so eager to give his entire life to the Gospel of love. Here was a man who thrived on God's love everywhere he went. Even when missioned in a quiet parish in Europe, he received the challenge to bring God's love and light into every corner of that quiet world to renew the lives of the faithful and ensure their lives were rooted in Faith, Hope and Love, even though he dreamed of doing missionary work abroad! When he finally got his wish to evangelize abroad, like Jesus, he gave his life so that others would know what it was to be renewed by this  divine love.

And it's that renewal that we should seek the most. We can read something from Revelation and dream of the far off distant kingdom of God where there will be no more tears, no more violence or hate, but only God's warmth and tenderness around us all the time, or we can live out Jesus' radical commandment to love all people as we have been loved, no matter what the cost, no matter what the response -i.e. even if people return our love with hate!-. A difficult lesson to learn, but a necessary one for anyone who dreams of a better world! I understand that even I will fall short of living this commandment perfectly, but I also know that being renewed means that I should expect to struggle and stumble with this commandment, but that I must come back to it the next day/moment to try to live it out more perfectly. Day by day, moment by moment...en haut...en avant!