Pizza, Prayer and the eternal fire (in the arcade)!

In the Arcade Fire song 'Month of May' there's a line that mesmerises me: "Just when I knew what I wanted to say, a violent wind blew the wires away". As it the case with many of their songs,  I don't necessarily have a perfect understanding of what is being depicted here, but there are 2  images that kinda stand out for me:
1) We depend so much  on technology to communicate our experiences to others (this blog would be living proof of that!) that if this technology were to fail - 'the wires being blown away'- we may be paralysed.
2)  " just when I knew what I wanted to say" to me implies that we don't always know exactly what to think or say or how to express our views. There can be a struggle behind finding the exact words to communicate our  experiences to those around us.

This blog  entry is in part inspired by that 2nd idea. This would bring the total of number of blogs where I wrote about, or was inspired by this band, to 3 in the last 3 months! In another blog I contribute to (http://iboetnonredibo.blogspot.com/2012/05/finding-god-in-rock-part-2.html,) I wrote about how Arcade Fire (AF) has this eerie ability to write songs that become spiritual for me. The music allows me to transcend the world, but their  lyrics bring me back down with powerful images that don't always make sense but that somehow manage to make some reflections on the world we live in. In that particular blog entry, I mentioned a rather abstract, spirtiual experience generated through the music of their most recent album, 'The Suburbs'. Today's entry may be a little abstract as well, but it relates to a more concrete experience that had a strong impact on me.


Before I describe this experience, perhaps a little context: One thing my readers should know about my faith is that  although I support the Vatican and love the wise words that can emerge from that sacred place, I'm not one of those Catholics that blindly agrees with everything Rome says.  Nor am I the kind of Catholic that is a radical liberal Catholic who assumes that everything that our society is fighting for is always right, and that the Church is always wrong. My middle ground is the following: I am committed to following Christ till the end of the earth and beyond. I am eager to  fight for a heavenly cause -justice, peace, tolerance-  in the name of love, so that God's Kingdom may triumph over the evils of our world. However, I do not do any of this without questioning my faith. Especially nowadays: There are many out there who are making a mess of this Church of ours by reducing it to a community of people whose main concern is to  stand against the world and it's liberal values, rather than being a community that tries to love this sinful world as Christ did. Loving it does not imply agreeing it, but nor does it imply judging it. God alone is judge. Unfortunately, what triumphs in the Church these days is a mentality of criticising without loving the sinful world we're in. There continues to be much craziness done in the name of the Church, and there are moments when I feel it would be easier to just give up everything and quit this community.

But I don't want to. In fact, even if I sort of half wanted to, I wouldn't. I belong here more than I've belonged anywhere else in my life. The problem is, I don't always remember or understand  why that is. I get so wrapped up in wanting to defend my beloved Church from the angry  ( at times justified, at times, just plain uneducated) cries of the mob in the secular (and Catholic) world, that I forget to stay close to the heart of this Church, which is the heart of Christ. It's that easy for me to find the right words to express why I love Jesus, and why I chose to follow him in the Catholic Church: Go to the heart. If I did, I may understand why it is I'm willing to put up with all the craziness, and even expose myself to more! Well, those of you with faith know how God works: You may not expect solutions or answers from the big divine, but God will provide them nevertheless.Last Friday, that is exactly what he did for me. He used a seemingly unspectacular event, to help me gain perspective. It was a simple event...one I experience almost every day: Mass. 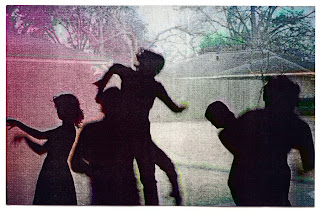 "In the Suburbs I learned to drive.."

Prior to mass, I had just spent the last 3 hours preparing pizza for the night's supper. With the wonderful inspiration provided by  AF's the Suburbs album, I prepared the dough( which we made the night before), put it in pizza shape, and covered it with tonnes of sauce, meat and veggies. It was a labor of love, but with the music, it almost became a prayerful act. By that time I was done though, I was pretty exhausted and really really not in the mood for Mass .Then our guests for the evening arrived. 5 sisters from a neighbouring community and their mother superior (no she did not jump the gun!). Just being with these young women of faith alone was inspiring enough, but there were other moments that absolutely blew me away.  You're probably thinking " why would it 'blow you a way'? You experience Mass everyday don't you?" Certainly. But the mood was different this time.

I realized, as we were all saying the same responses together, with great synchronism, how united we become, how much of a family we really are because of our prayers, our faith, and our walk with Jesus. Here we were, men and women, First world and 3rd world people, Canadians, Venezuelans, Columbian, Puerto Ricans and others...united in prayer, the same prayers that each of our ancestors had been saying for more nearly 2000 years, and the next generation of Catholics will continue saying thousands of years from now. My heart was indeed on fire with joy over this. To know that I was part of something great because the man we were following was the greatest thing that has ever happened to this little planet of ours (next to this planet's creation of course!).It's strange though. Our hearts can catch the eternal fire, and then forget that it ever experienced its divine warmth in the first place. That speaks not to the ephemeral quality of the fire, but to our own weakness as humans, our struggles to contain or understand it.

Meditating on this eternal fire did allow me to find those elusive words that explain why I remain a Catholic despite all the messiness: What is it that generates this warmth in me when I think of the Church? Continuity, unity, but especially...diversity. This is what was expressed by our group that night, and this is what inspires me about the Church. There is so much working against the Church these days, from  angry secularists who are eager to dismantle the church, to defensive traditionalists, who are so desperate to preserve the faith they've always known that they'll protest everything that may mean change in the Church. Both groups upset me, but neither group is strong enough to overcome this unity we have in the Church through our prayers, and the Mass.  We may be divided, but God only sees our unity. The eternal fire transcends all our conflicts, all our struggles, and leads us to a greater experience of joy and freedom every single time. Wow, it sounds like I finally found what I wanted to say about this faith of mine! And the wires haven't been blown away yet (-;

Peace to all of you, and blessings on your journey, your quest to finding the right words that capture your experience of life!