My homily on the feast of St Joseph (March 19th) 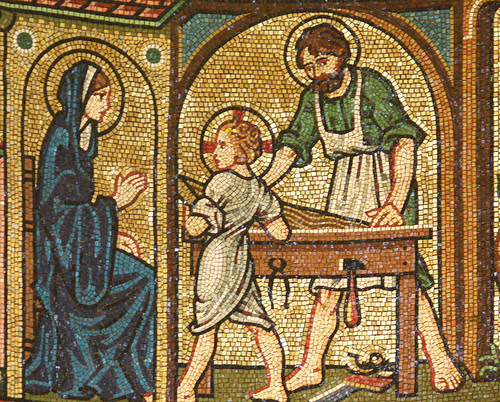 It is a great privilege for me to be sharing words with you today. Because Joseph, has a very special place in my heart.  Not only did I have the honour to share my thoughts on this quiet, yet incredibly important man in the story of Jesus last year in Wiky on the feast of St Joseph, but ever since I’ve come back to the  Church, he’s been a presence in my life…but my main focus  today will be on the readings…and yes, I will be channeling a little bit of Jonathan Goldstein for this one ( Jonathan is a broadcaster on the CBC who is a great story teller. He has retold the story of the nativity from the perspective of Joseph)
My initial reaction was to  assume that the 2nd Samuel passage was a little at odds with the story of Joseph, and even more so with that of Jesus.   I mean, if we think of the prophetic lines about the coming of david’s offspring that will establish a new kingdom pleasing to the eyes of God  and see that from a Christian perspective, it makes sense…but it probably would have had a very different meaning for even someone like Joseph.  Although I’m sure Joseph understood that he came from the royal line of David, it had been so long since the collapse of the kingdom, that this royalty thing may have been nothing more than a distant dream to him, if even that. Perhaps, like many of his countrymen, he still had hope for the coming of a King that would restore the kingdgom of Israel,  and return a sense of pride to the Children of Israel.  Although this simple carpenter was probably not a radical nationalist, we can imagine that he still had dreams that he would see his people’s glory restored by this great messiah, this son of the Great I am.
So imagine his shock…when he learned that it was his Mary, that would carry this great king…and that the king would not sit on a royal throne –as Nathan had prophesied-and restore the glory of Israel, but he would be humble, poor, and yet, still save the world from it’s sinfulness, and lead them into a new kind of glory…not the one that Joseph and his countrymen had been dreaming about. Not an earthly glory, but one that came from God. The Kicker for me, every time, is that…Joseph goes with it, without a moment’s hesitation. Even Mary questioned a little bit “ you sure I’m going to bring a baby into the world?? Oh Gabriel…did no one ever give you the birds and the bees talk…”.  And this wasn’t even a dream for her..this was an actual angel standing before her talking right at her, telling her how things would unfold
Our boy Joseph, all he had to go with was a dream…a dream that awakened something in his faith, that connected him with God’s almighty plan, but still just a dream.. Do you realize how foolish any of you would look today if you were making some radical life altering decisions, and when people ask you “ What could possibly possess you to do something so  ludicrously insane??”,  you meekly answered “ God told me in a dream.”  That’s it? One dream? You didn’t discern for a couple of days or pray about this…you just...took instructions from an angel you saw in a dream and took off??? .
Well yeah. That’s what people who are in love do. They don’t listen to the logic of the world around them.  Joseph’s love for Mary is so deep, that he is willing to go against  the conventions and laws  of the times, and doesn’t tell anyone about her ‘secret baby’ but decides to divorce her..quietly, without making any fuss, so that she could keep her dignity.  A great sign that this man’s  righteousness surpassed that of his world.
Because of that… I do not think God could have chosen a more perfect father for Jesus.   A man who so open to listening to the voice of the divine within him;, a man so commited to a deep experience of love that he would allow his own world view to be challenged and transformed; a man faithful, and unquestioning in his faith until the very end. 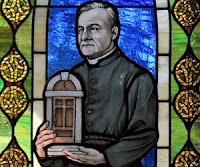 We know way too little about St Joseph, and I find that a shame. I
suppose we can always turn to St Brother Andre and the inspiring model
of humility and healing he brought to the world, to remind us of the
grandeur of this man, a silent figure, but an integral part
of  the greatest story ever lived.