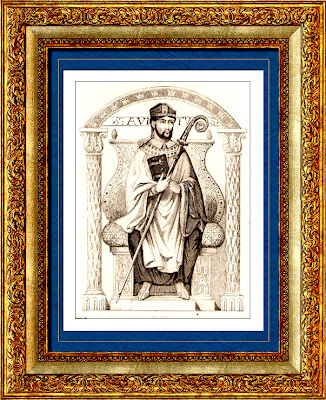 Today is my last entry for a week before I go on my yearly retreat. I could in theory continue these entries, but it's more in spirit with the retreat that I go offline during that period!! Our Saint of the day is a little known Monk.

A native of Orleans, took the monastic habit, together with St. Calais, in the abbey of Menat. The two Saints soon after returned to Miscy, a famous abbey situated a league and a half below Orleans. It was founded toward the end of the reign of Clovis I. by St. Euspicius, a holy priest, honored on the 14th of June, and his nephew St. Maximin or Mesnim. Many call St. Maximin the first abbot, others St. Euspicius the first, St. Maximin the second, and St. Avitus the third. But our Saint and St. Calais made not a long stay at Miscy, though St. Maximin gave them a gracious reception. In quest of a closer retirement, St. Avitus, who had succeeded St. Maximin, soon after resigned the abbacy, and with St. Calais lived a recluse in the territory now called Dunois, on the frontiers of La Perche. Others joining them, St. Calais retired into a forest in Maine, and King Clotaire built a church and monastery for St. Avitus and his companions (blogger's note: unsure when he built it. One site suggests 1045 as the date when it was built, but Clotaire was King in the 6th century. I also  haven't been able to determine whether the Abbey is still standing, or whether there are only ruins left today, but a community does still seem to exist, a Benedictine nunnery, called St. Avy of Chateaudun and is situated on the Loire, in the diocese of Chartres). Three famous monks, Leobin, afterwards Bishop of Chartres, Euphronius, and Rusticus, attended our Saint to his happy death, which happened about the year 530. His body was carried to Orleans, and buried with great pomp in that city.

I don't think I've done very much justice to the readings in the past few weeks, but they have been nothing short of extraordinary (which is ironic, since we're in Ordinary time!!) (for non Catholics, Ordinary time is that period between Lent/ Easter and Advent/Christmas that takes up most of the year! It's marked by the color green, unless there's a special feast day, solemnity, or a martyr celebrated..then different colors are used during Mass.)

What's been so outstanding about the readings in the past few weeks, is that there's been a very concrete invitation to renewal, and depth almost everyday. This is especially true since last week and continuing this week,  with the powerful readings form  2nd Corinthians and the foundational ones from Matthew 5 -the text that follows the Sermon on the Mount-.
I feel like, after we've gone out of Easter season, the readings have been trying to help us answer the question "what now?". They've been pointing us to models of Christian living,  and have been inspiring us to seek the good of God in all we do, no matter what.

Paul speaks a little bit of the consequences of our beliefs, not just in his world, but even in our world, where people of faith are often denegrated, insulted, labelled as stupid, and outdated, out of sync with the 'enlightenment' of the modern era. But rather than taking offense at this, what he's suggesting is that we live through the hardships with the same patience,and humility as Jesus did.
This is a challenge, especially for someone as passionate as I am. When I hear people dismiss all Christians as 'idiots', it doesn't take me long to take offense, try to defend the Church, and even accuse the speaker of these words of narrow-mindedness. So much for turning the other Cheek, as the Gospel teaches us to do today.

Jesus' teaching are a challenge in other words, even for those of us in religious life. But as St Ignatius teaches us, we have to be ready to chose poverty over wealth, to chose humility over pride, to accept to be hated because our love is so strong. As St Paul says, it's our job to be poor, and yet to make many people rich in the spirit, and to be considered as with hate or confusion  by the world, but to have our own life renewed by God's love, which will always be the only thing we need. We won't get there over night, but I feel that this journey we're on is the new song, and the joyful noise we sing to the Lord!  This song, this joyful noise won't make any sense to some, and will even piss off others, but it will never fail to be a source of hope for many!