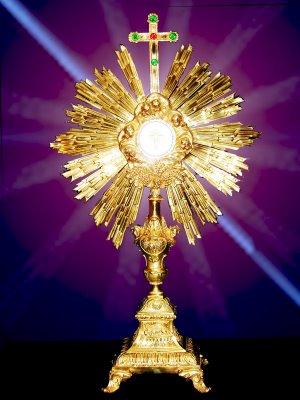 This week -Thursday-, Catholics celebrated  the real presence of  the body of Christ in the Eucharist, with
the Feast of Corpus Christi. In big cities around the world,Catholic communities came together to do a mini pilgrimage in the heart of the city, walking  from one Church to another, to celebrate the real presence of Jesus in our lives. We also celebrated the most Holy body and blood of Christ today -the Solemnity of  Corpus Christi.- Despite the tremendous joy that the Real Presence brings to our lives, it's probably one of the most controversial doctrines in the Catholic Church. Even the early followers of Jesus seemed absolutely revolted by what Christ was inviting them to too in eating bread that was his body and drinking wine that his blood. To this day of course,  most evangelical and baptists merely see the Eucharist  as a symbolic gesture we do to commemorate Jesus- some communities don't even have bread and wine/juice that regularly as part of their weekly service-. Although they're much more literal in their reading of the Bible than most Catholics, the part of the bible where Jesus does institute this mystery (which all 4 Evangelists, and many of Paul's letters mention), they'd rather explain away by saying 'it's just a symbol, nothing more'.

This would be the more comfortable explanation, one where we don't have to deal with this idea of eating our Lord's flesh, an idea that even many Catholics  chose not to think about too often. It is a messy idea, there's no denying that. However, when you think about how Christ offered himself completely to us, to the point of humiliation and death, you realize... There is really nothing pretty, neat, or simple about this. It's supposed to be messy and complicated. Perhaps that's why in the early days of my return to the Church,  this doctrine didn't strike me as being very attractive and I sort of avoided thinking about it whenever possible. However, even at that confused stage of my spiritual journey,it was as if I intrinsically understood the value of the Host that I was consuming every Sunday. Since those earlier years,I've never had a truly powerful prayer during adoration when the Real Presence is exposed before us in a monstrance (as shown above), but I at the same time can feel moments of peace and quiet  before the Eucharist that are unlike anything else I experience in my everyday life.
A similar experience takes place with many stories of conversion I've heard, especially with individuals that are coming  from other Christian denominations. Some of these conversions begin with individuals hearing about this doctrine of Christ's presence in the Eucharist. When they begin to ponder this, they start thinking about the presence of Christ in their lives.  We all would like to believe that Jesus in present in all the things  we do, and all the people  we meet and this belief is important. But after a while this belief may bet a little vague, undefined, and almost becomes part of some fluffy, new agey spirituality people have. There's something Awesome -in the most literal, and not cool sense of the word- about being able to sit before the Eucharist in Adoration, and to let ourselves disappear, to let Christ enter our consciousness by our meditation of His presence in the Eucharist. People's lives have been completely changed by this meditation...to know that we are able to partake in his body every day/week means that we are active players in the mystery of the trinity...that we ourselves, become as it were, the Body of Christ. The whole process is exquisite: We begin with Masses every week, where we consume the body and blood of Christ and keep this spiritual food within ourselves; We then meditate on that living presence during adoration, where we realize that by adoring Christ's real presence in the Eucharist; after all this, we slowly start becoming  with the rest of the Church, the Body of Christ ourselves. It's an incredibly mystical, deeply profound mystery that can't really be talked about with words, and yet, this is precisely what I will be doing in my next blog, as I attempt to comment on today's readings.