Living in trust: Readings of May 10th

My last entry for the next couple of days is an opportunity for me to rectify a mistake I did 6  months ago. Back then, I blogged ( for the Jesuit Scholastic and Brotohers blog "Ïbo et Non Ridibo" )about a Belgian St, Saint Damien of Molokai. His is a very interesting story, and I wrote about him back then because some sites listed his feast day as being October, which is the day he was canonized. But in fact, his actual feast day was May 10th -so, yesterday!- the day he  first landed in Hawaii to live out his mission.  This is an exert from the blog entry I wrote back in October: 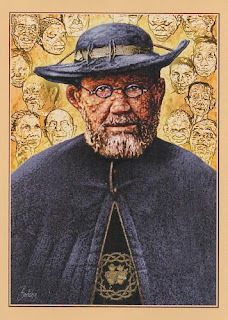 St Damien (1840-89) was a seemingly ordinary 19th century saint, but he left his own mark on the world due to his ability to go the extra mile and offering his life to those who needed it the most. He didn't do anything extraordinary; he just placed himself in a position that nobody wanted to be in. He left his native Belgium to go live with people suffering from leprosy in Hawaii. He himself would eventually die of it. In that simple offering, he was able to serve this people with his loving presence for a short while. His story is short and simple. His act was not. And the responses to this act are what make the story even more compelling.

One of the first reactions to his life was one of criticism from  a Presbyterian minister in Hawaii. The minister didn't like Damien’s methods and said that his leprosy could only be attributed to his own carelessness! What’s incredible is that two famous people actually took the time to respond to this attack, and to defend the future saint.

The first was a direct response to the minister from a fellow Presbyterian,  Robert Louis Stevenson.The Scottish novelist who wrote works such as Treasure Island and The Strange Case of Dr Jekyll and Mr Hyde, had visited Hawaii and heard of the attacks on Fr.Damien. He took it upon himself to respond to the minister who criticized the good Padre. In his letter he stated, “But, sir, when we have failed, and another has succeeded; when we have stood by, and another has stepped in; when we sit and grow bulky in our charming mansions, and a plain, uncouth peasant steps into the battle, under the eyes of God, and succors the afflicted, and consoles the dying, and is himself afflicted in his turn, and dies upon the field of honor – the battle cannot be retrieved as your unhappy irritation has suggested. It is a lost battle, and lost for ever. One thing remained to you in your defeat – some rags of common honour; and these you have made haste to cast away.”The second famous person to react to Fr Damien's selfless act,was Gandhi. He wrote that Damien had been an inspiration for his own social initiatives in India. He continued this way, “The political and journalistic world can boast of very few heroes who compare with Father Damien of Molokai. The Catholic Church, on the contrary, counts by the thousands those who after the example of Fr. Damien have devoted themselves to the victims of leprosy. It is worthwhile to look for the sources of such heroism”.
Father Damien on his death bed


As we continue our 3 week journey through Acts and John, 3 themes really stand out today: Doing God's will as opposed to ours; Accepting pain as a necessary part of Joy; Trusting that if we genuinely ask God, we shall receive. That 3rd one is a little more tricky and needs to be taken with a grain of salt, but let's see how they all fit in with Friday's Saint of the day and the readings.
You'll remember that in my last entry, -for Thursday's readings- we read about Paul losing patience with the Jews and Greeks of  Corinth. I guess Paul had taken the decision that his work was done here, there was no sense in wasting any energy on this stubborn people that wanted nothing to do with Jesus or Paul's message of the resurrection.. he EVEN turned to instructions of Jesus (related in Matthew 10:14 and other passages i'm sure!) to make his point, by shaking the dust of his feet, as he intended to move on from Corinth and go to the Gentiles. However, God makes it clear to him in a dream that this is not to be.. He lays it out for Paul, saying that he can't be afraid to continue speaking despite the hostility, because there are still people who will receive the message. We even saw it in Thursday's readings, that the leader of the Synagogue was converted  by Paul's testimony.
So, not our will...but God's will be done. Sometimes, we may think that there's nothing left for us to do, and we're ready to give up on something, or we think it's not really our place to be doing whatever ministry we're doing...but if it helps people...even just one single person, then who are we to say that we're not doing God's will? The problem for some Catholics, is that they look at the likes of St Damien, or St Theresa of Avilla, and they say 'who can ever live up to that?'  It's true, not many could, but why would anyone assume that this is the only thing God wants us to do in order to do His will? As one priest said in a homily today, we need to ask for the grace to recognize our own strengths, and to realize that therein lies the way in which we can accomplish God's will. So we're not all called to be self sacrificing Saints...does that mean we can't fulfill God's will? Of Course Not!!!  Although Not saints, there is much we can do in God's name, if we only ask for the strength to do so!!
This ties in somewhat with Jesus words from the book of John, around Asking, and we shall receive. I never quite knew what to make around this passage and the various variants of it throughout the Bible - including Mark 11:23 which speaks of our ability to move mountains if we ever so willed it-.Anyone who expects that God will provide anything we ask for is not really understanding that this passage is really about Trusting in God, not getting all that we desire. So I've wrestled with this passage for years, until I went on my pilgrimage.

Every Jesuit novice, during their first year of studies, around the end of that year, is asked to make a pilgrimage to anywhere they wish -within limits.- The way it works, is that you're given 50 $, and a one way ticket to or from some place. You have a month to get to that place and to come back to the novitiate -this is how we're doing it in Canada. I'm told it's not like that in every Jesuit province!- For my pilgrimage, I opted to hike across the Appalachians for 2.5 weeks, and after that time, I slowly made my way to Boston, which would be my last stop before heading home. That meant I would have to ''raise" money in Boston to secure my bus ride back to Montreal -where the Novitiate is-.  The superior of the Jesuit community that was hosting me in Boston, encouraged me to go begging in the streets of Boston, and that whatever money I hadn't raised during that period, the community would supply the rest.  Oddly enough that day, the gospel passage was the one from Mark, the whole bit about moving mountains. Again, my reaction to it was one of skepticism ("We all know God doesn't work that way!"). So I went around to some Churches in Boston and I sat on a street corner with my  " jesuit on pilgrimage. Need to get home"sign. At one point, sitting on that street corner, I revisited that verse.  What is the thing I wanted more than anything else at that point in time? At least half the price of my bus ticket home, would have amounted to about 50$.  "so offer it up"said a little voice within.  So i did...that figure became my immovable mountain, and I trusted that God would provide with all my heart. With time, I had raised about 30$ with all the money I had left over. It wasn't a super productive day, but I had done my share. And as for the prayer I had made about 50$, I felt validated in my skepticism, but still at peace with God who had provided so much for me during the whole month. At around 4pm, I was getting ready to pack it in...and a couple from Texas stopped to talked to me. They looked like hippies, so I really wasn't expecting anything at all from them, but I also understood that part of my ministry there was to be present to people. And so I chatted with them for a bit. After a while, the gentleman pulled out his wallet, and gave me a 20$ .I now how exactly 50$
I still get teary eyed sharing this story. I don't understand any of it. All day long, people had never given me more than 5. Why at this moment, when I was ready to quit, did God grant me this prayer? Even more painfully, why did he fulfill what I desired at that point in time,  but he let my sister die at the age of 32 after an 8 year battle with cancer -despite my vigorous prayers for her healing-?. It's a mystery. But Jesus does provide us one of the answers in today's Gospel: We will suffer.
But in our suffering, we will journey to a joy that is unparalleled to any joy we've ever known in our entire lives.  A joy rooted in God, and in our understanding of Jesus's mission in this world.
But in the meantime, we grieve. And as has been mentioned in the readings for two seperate days, we grieve while the world rejoices. When Jesus hung on a Cross...many probably were very relieved that this man bent on turning the established order on its head had finally met his end and rejoiced. Just like today, many in the secular culture rejoice at Churches closing down, at religion being taken out of public schools etc...but in our grief, we are brought closer to God, and made stronger in our journey. And our Lord continues to care for us, but not on our terms. On his. Which means, there will be loss, and there will be agony. But these only pave the way for the greater joy that is to come when we finally meet our Lord, face to face.