The life of a Brother in Toronto

It's been a long time since I've written on this blog. My apologies for the delay! I guess, you can say I've been a little busy, but also, shockingly, I think I've lost a bit of my desire to write in the past little while. I don't quite understand where this is coming from other than the fact that I have a lot to do, but I can't forget that during my pilgrimage, I was given a bit of a revelation: There are many things I could end up doing as a Jesuit, but there's only one thing that Christ really seems to be calling me to do with all my heart, and that is writing. The reason for this is that there is still a dream that I cling to that I can impact the world, and help create social change as a Jesuit, and I don’t see myself achieving this in better ways than through my writing. It may be just a dream, but at the same time, I find myself in a position -even in here in Toronto- where people turn to me for help, where they depend on me, and are even helped by my actions. SO it's not a pipe dream, it's the reality of my vocation. I make myself available to people, which means that I can and do help more than I can ever immagine. Furthermore, I know that my writing has impacted people in the past emotionally, or otherwise. So why wouldn't I come back to it? No reason. I guess that's why I'm here this morning!!
It's now time for the Toronto Vs Montreal segment. Some dramatic pictures to illustrate this segment:
T Dot 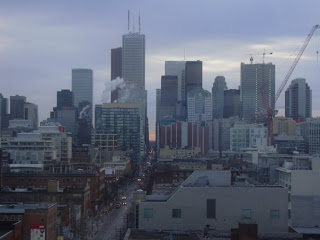 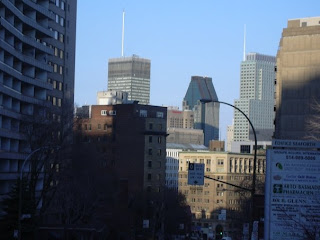 Toronto is a lovely city, and even though I miss Montreal...actually, there’s no even thoughs here..I miss Montreal. Toronto is still and will always be a lovely and inviting city with lots of diversity and culture. That doesn't change the fact that Montreal just has more charism, more energy, more colour. I guess that's my own bias. This is why I put this survey on my Blog. I was talking to someone about Bagels recently, and it dawned on me that I had heard of a debate in Montreal as to which place had the best bagels, but could not remember the results of that debate, so I leave it up to the people to resolve this one!!
But back to my Toronto Vs. Montreal  point, there’s no question that I miss lounging around on St Catherines on a Friday night, or that I’m annoyed I couldn’t be in town for the Arcade Fire concert, or that I long to be closer to my family, or even that there’s a part of me that has died when I left McGill Choral…I can’t deny any of that. However, Toronto is a city with great charm, and thanks to the Jesuits, to my Toronto family,  to the Newman center, to a little Movie called Scott Pilgrim vs the World, and to Ted’s perpetual flair for adventure, I have found my niche here as well: Like Montreal, Toronto is a great walking city; It tries to rival Montreal in terms of fine dining (Does very well in some departments, and not so much in others –that’s my way of saying that nothing can come close to rivalling Schartz, at least, not in Toronto!-);It has a great cultural scene ( The one thing Montreal does poorly in, Toronto is great at: Musicals!!!!) and does have interesting history. I mentioned a movie though…Scott Pilgrim was not only filmed in Toronto, it’s based in Toronto and largely filmed with Canadian actors with a large American contingency as well! It’s the first movie I saw at the house this year…I just stumbled upon it..I had no idea what it was going to be.  It turned out to be a lovely tribute to this city, a very funny movie, but also a very artistic approach to storytelling. If you’ve not seen it yet, and are looking for a cute story and a creative film, I highly recommend it.

Email ThisBlogThis!Share to TwitterShare to FacebookShare to Pinterest
Location: Toronto, ON, Canada