A journey of discovery

There are many factors that get in the way of my seeing much of the rest of Manitoulin Island outside of our weekly visits to Anderson Lake - not having a license being the main one, but we're also pretty busy here most of the time, so that cuts down on potential traveling time!!-.  So, you can understand that I was rather looking forward to spending a day or 2 with Fr Jim Kelly, who has parishes in 4 other locations on the Island (M'Chiging, Gore Bay, Mindamoya and Sheshawaning. ) a few weekends ago. Besides the fact that I knew I'd get along with Jim amazingly well, I was eager to see some other parts of this beautiful Island, but also to visit other parishes. As attached as I am to Wiki, I needed to experience how other parishes live their faith on Manitoulin Island.
And I got to do just that on this particular Saturday afternoon and Sunday, though there was much more in store for me that I had imagined.  First off, Jim was a brilliant guide!! He and I were driving from Anderson lake where we had spent the day helping out at a ministries weekend, and he kept taking detours and stopping in places so that I could see the hidden treasures of this Island. The most wonderful site for me was in the La Cloche Mountains.  This mountain range gets this particular name -The Bells- because
according to Wikipedia "the hills were warning bells, used by local first Nations  for signaling. These "Bell Rocks" could be heard for a considerable distance when struck, and accordingly when  the French voyageurs  explored the area they named it 'la Cloche'."  Well...on this particular day, Fr Jim took me to a site where we could find one of these bell rocks. We went into a quarry, and after a few minutes of driving, got to a spot where we could see and hear an example of this very special rock..if you banged it, it was as if you were banging a sheet of metal (or...I guess...a big bell!!). It was rather fascinating. And the mystery to me is that there were no other rocks around it that have that same property, though there are said to be quite a few of them in this mountain range that do. I had heard many legends about these bell rocks since I've been here, so it was nice to actually hear one!! 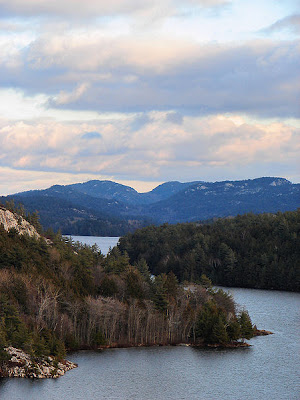 Of course, driving around this area means is quite beautiful. The mountains cut across much of the Island and make for a very scenic drive. According to some people I spoke to, these are probably some of the oldest mountains in the world. Millions of years ago, they were probably as big as the Appalachians or the Rockies. Anyways, we drive up this very same route every week to go up to Anderson Lake -which is off the Island, in Espanola- and I never get bored of this route. The mountain range itself is part of 'Rainbow County' and as I recently learned, the reason for this name  is that the rock from the Mountain range is various colors of reddish brown, greyish light blue, and some could even argue yellow.It makes for a stunning site to see every time!

The second reason that the experience was very moving for me was that Jim had asked me to speak at one of the parishes about my vocation. Now, I assumed  I'd only speak at this one parish only, but in the end, he asked me to do it at all 3 parishes. And true to character, I was very passionate and even emotional about this vocation of mine, to the point where I made a few people cry in all 3 congregations that I visited. Jim was very happy about the impact I had had on his parishioners, but mostly, I was just inspired to meet with people afterwards who came up to me and thanked me for sharing my experience with them. One father brought his teenaged daughter to come chat with me about my experience in Russia and with missionary work, as she was about to set out on a school trip to Latin America; One woman thanked me, saying that she had been praying that her teenaged son would be able to hear something inspirational coming from the Church as he was about to graduate from High school and probably needed a little inspiration -didn't think what I had to say was that inspiring, but she claims it was!-; In the last parish we visited, I met a school teacher from Scotland who was visiting her uncle who works for Development and Peace in Canada and who attends Church in this region. She was also very moved by my account and insisted that the Scottish Catholic Church needed Jesuits like Jim and myself to come infuse it with life.

In a way, all of this was very humbling. I know I've got a gift with words and a passion when I get fired up by stuff...but I don't feel like I usually have much of an impact on people's lives, nor do I have public speaking skills. I speak from the heart...that doesn't mean I speak eloquently! But apparently, that alone is enough to achieve something in this world. Apparently, my vocation and the stories that shape it can inspire people today. Perhaps that's where the humility comes in!! See,the way I envisioned my vocation, my Jesuit life will be busy, but at the same time quiet...far from the limelight. I knew I'd be doing 'great things' for and with God, things like teaching kids, working for social justice, being a spiritual guide to people in need, becoming a writer who takes a critical look at the modern (nonspiritual)  world etc... but all of this, I expected would be done very quietly and discretely, in a little community, far from public attention. But then there are moments like these ones I experienced 2 weekends ago that force me to ask the question "if I do have that kind of impact on people, shouldn't I trust that God wants me to go out there and inspire people with my passion rather than become a self effacing Jesuit who works assiduously for a better world but stays away from being the center of attention??".

Well, I don't know the full answer to that question yet. All I know is that this place has challenged my concept of what my 'Brother's Vocation' is going to be in so many ways, which only reminds me that, perhaps it would be good for me to stop assuming I know exactly what it is that I will do as a Jesuit, and start assuming that there is so much that I need to discover, about God, about the world, but most importantly, about myself. In the end, I am starting to understand one basic principle: I've always beaten myself up over the fact that there is so much 'basic knowledge' that I don't have -especially in the Sciences-, but what I should be doing instead is to accept that
a) there is a wonderful humility within that lack of knowledge that is edifying for many people, one that says "I have a great life experience that has given me much wisdom that I am so happy to share with others, but I also have so much still to learn". I can never let go of that.
b) In fact, the 'lacunes' in my education are not something to be ashamed of, but an opportunity to expose myself to new experiences, which I know I will cherish and embrace for the rest of my Jesuit vocation. I think that's  what's key here: I really don't know what lies ahead for me...but I do know that, no matter what I do, every day can be educational, if I allow God to work in me as he has been doing here!
Posted by Dan Leckman at 14:15